There is an old saying that, “The show must go on,” but officials at The Arena in Corbin say it remains to be seen what will happen with the October 24 concert that was to feature The Charlie Daniels Band and Marshall Tucker Band in the wake of Daniels’ death Monday morning.

Balla said the concert was scheduled as part of a short tour of six to eight shows.

This would have marked Daniels’ second show in Corbin. Daniels along with Travis Tritt played The Arena in 2017.

“He was amazing,” Balla said of Daniels, noting that despite his fame, he was very sweet and loving.

Prior to the concert, Corbin Police Chief Rusty Hedrick and Officer Steve Meadors met with Daniels, bringing along a fiddle that had been donated by Gibson’s Music. The officers explained to Daniels that they intended to sell chances to win the fiddle to benefit the department’s new “Shop With a Cop” program.

“We explained what we were doing and he graciously autographed it,” Hedrick said previously, noting that Daniels added an autographed photo to increase the value of the package.

“He was so spunky,” Balla said of Daniels. “I was looking forward to seeing him again.”

Daniels who came to lead the Charlie Daniels Band in 1971, is best known for his hit, “The Devil Went Down to Georgia.”

He was inducted into the Country Music Hall of Fame in 2016. 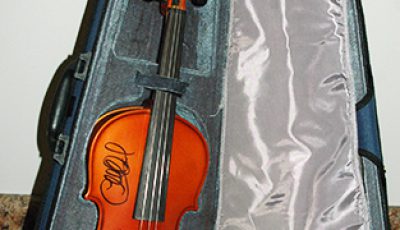