A Corbin area Boy Scout has taken on a monumental task, removing more than 45 years of overgrowth from a small cemetery. Max Richardson, a senior at Corbin High School chose to clean up the overgrown McHargue Cemetery near the Corbin water tower as his Eagle Leadership Service Project.

Life Scouts who are working to earn the rank of Eagle Scout must plan, develop and give leadership to others in a service project helpful to any religious institution, school or to the local community.

The cemetery, which has graves dating back to 1886, has approximately 75 graves, including several military veterans.

Calvin Patrick, who died in 1914, fought in the Civil War.

Montgomery Thomas, who fought in the Spanish American War, died in 1915.

“I thought it was a great disrespect that it wasn’t being taken care of,” Richardson said when asked why he elected to take on the project.

Richardson began working on the project in 2015, explaining that the weeds and brush had grown to nearly six feet.

Once the brush and a giant tree that was in danger of falling, had been removed, Richardson turned to his scout troop for help removing trash that had been dumped in the area, including glass and even drug needles.

Richardson finished with the cleanup in November.

“I’m going to attempt to continue keeping it up,” Richardson said.

Corbin Mayor Willard McBurney said when he was told about the project, he was excited at the prospect, explaining that he had been asked on numerous occasions why the city didn’t clean it up. Since it is a private property, the city couldn’t legally do the work.

“It tickled us to death when the Max took on the project,” McBurney said.

Jim and Susan Begley have lived in the neighborhood for more than 40 years. Their home stands just feet from the cemetery.

“It was always sort of a barrier to the rest of the community,” Jim Begley said of the overgrown cemetery explaining that there was one McHargue grave and one military grave that someone would attempt to keep clean.

“We would see someone come in once a year and clean certain graves,” Susan Begley said.

“We have known Max’s family for a long time, so it didn’t surprise us that he was willing to take it on, especially with the military connection,” Jim Begley said.

“This has been a monumental project,” McBurney added. “There are not many people that would have done it and stuck with it.”

Richardson is scheduled to graduate from Corbin High School in May. 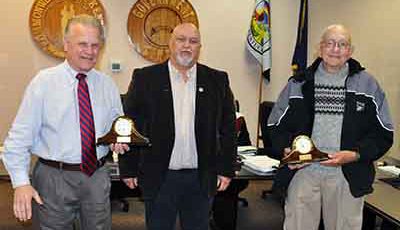 Corbin City Commission recognizes McBurney, Tye for their service to the community